Shakira Ndagire’s life is anything but ordinary. At 24, she is the youngest sex worker we met at Kawempe slum in Kampala, Uganda, where she has been a sex worker for half her life. She says she started selling sex “one way or another” when she was 13.

In those 11 years, she has achieved many things, including being a mother of two. Another triumph has been staying HIV-negative in a country where one in three sex workers is HIV-positive. To manage this impressive feat, HIV prevention has been a constant in her life.

“I use condoms all the time. The training on condom use has been very important to me,” says Shakira, gesturing forcefully with her hands. “I don’t care how much money a man gives me, I never have sex without a condom. And to ensure that security, I never go to a man’s house. I take the clients to my place of work.”

After squeezing through a narrow alleyway in Kawempe, we arrived at the entrance of the tiny brothel where Shakira works. Here, a container brimming with condoms takes pride of place in the main room, with no association of embarrassment, secrecy or shame. Many other nooks and crannies in the tiny rooms also contain condoms – bedside tables and drawers, window frames. 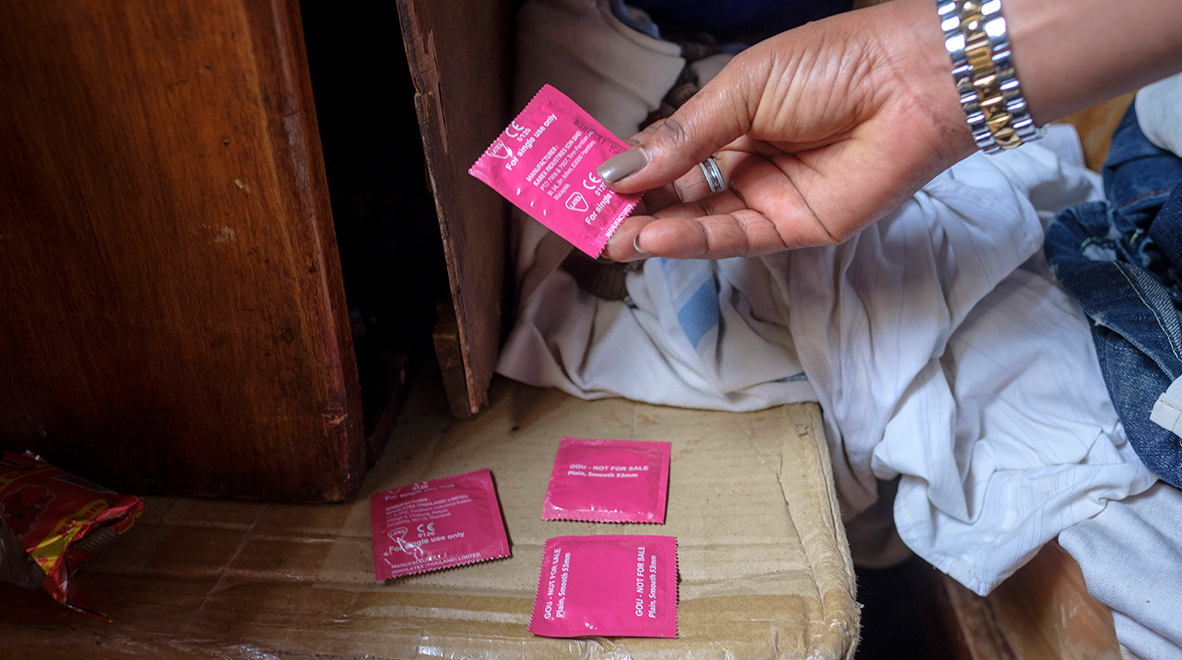 With condoms and other tools for HIV prevention, Shakira and other sex workers here go about their business with less nervousness about HIV than decades ago when this part of Uganda was ground zero of the epidemic. Shakira’s colleagues Doreen Mutoni and Charity Tumwebaze may be HIV-positive, but they face the virus not with fear but with a confidence learned from many years of living with the disease.

In addition to condoms, Shakira uses Pre-exposure Prophylaxis (PrEP) as one of her methods to prevent HIV. She is one of the first women in Uganda to be initiated on the latest HIV preventive tool in town. Uganda implements the program in partnership with the U.S. President's Emergency Plan for AIDS Relief (PEPFAR).

PrEP is a cocktail of HIV prevention drugs taken by HIV-negative people to reduce their risk of HIV infection. According to Dr. Peter Kyambadde, the officer in charge of key populations affected by HIV in Uganda’s Ministry of Health, about 1,000 women at high risk of HIV infection have been enrolled on PrEP in the country. 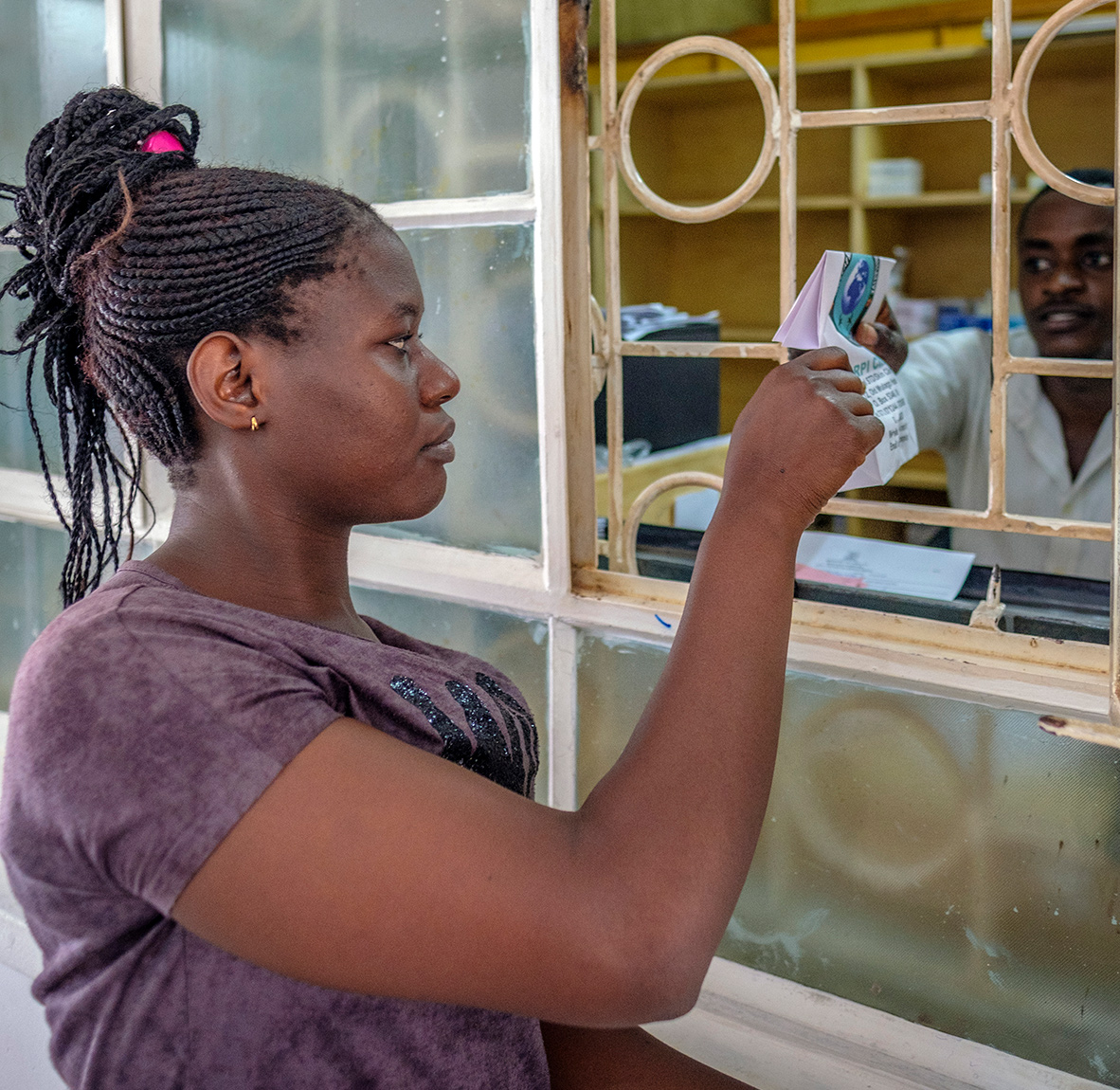 Shakira is one of the first women in Uganda to be initiated on the latest HIV preventive tool in town.
Photo: The Global Fund / Jiro Ose

Day and night as the tiny streets in the low-income neighborhoods here hum with life, protection against HIV for sex workers and their clients takes high priority. These are lessons that Uganda has learned from its past. HIV prevalence has declined significantly in the country to the current 6.5 percent. However, among sex workers, the prevalence has remained high at more than 35 percent.

In their late 30s, Doreen and Charity have been in sex work for more than 20 years, starting at a time when it was harder to protect oneself. Now, on HIV treatment, they continue to use condoms to not only protect their clients from the virus, but also themselves from re-infection (when an HIV-positive person acquires a second strain of the virus).

Doreen, Charity and Shakira get their condoms and other HIV prevention tools, including lubricants, at Most at Risk Populations Initiative (MARPI) in Kampala’s Mulago Hospital – a one-stop-shop for people seeking prevention and treatment for HIV. The center is supported by the Global Fund and other partners.

On a typical morning visit to MARPI, Shakira will receive a medical checkup before taking her latest round of PrEP. For her and other people affected by HIV, MARPI is a place of refuge, a space for community. They are welcomed here with a steaming cup of coffee, medication and ample camaraderie. 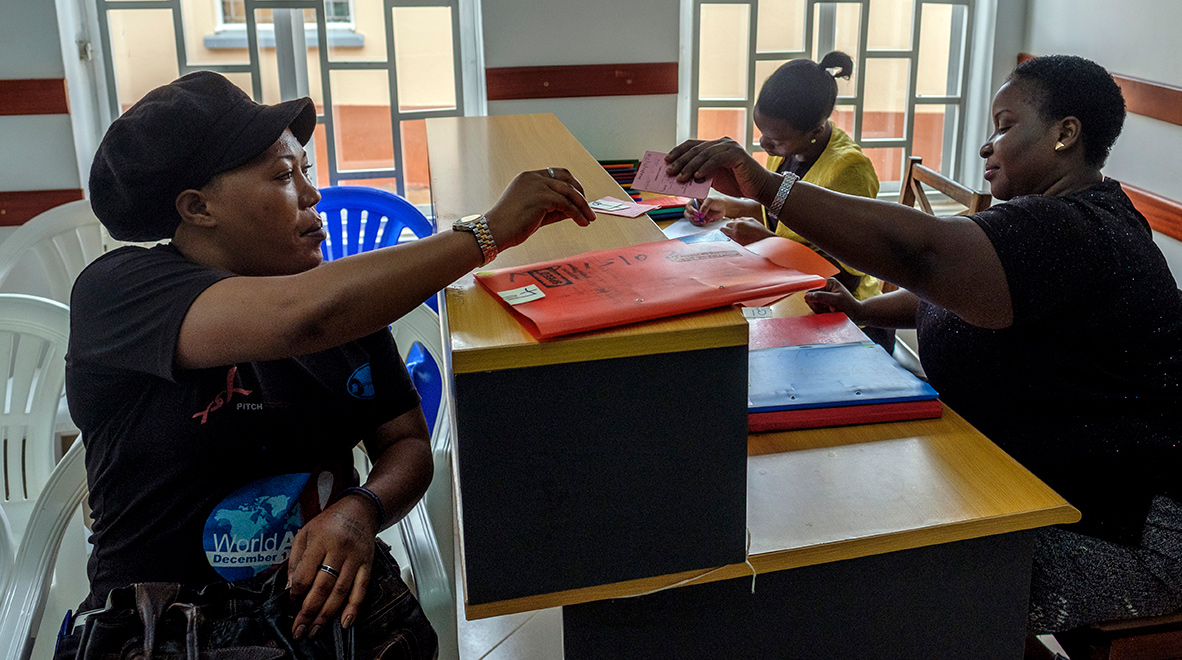 “I come to MARPI for my treatment for HIV, condoms, lubricants, and tests, including cervical cancer,” says Doreen. “I am alive today only because I came here; they embraced me, counselled me and started me on medication.”
Photo: The Global Fund / Jiro Ose

To beat HIV, prevention is key. It is for this reason Uganda’s political leadership has been at the forefront of HIV prevention campaigns. The Permanent Secretary in the Ministry of Health in Uganda, Dr. Diana Atwine says the success of Uganda’s fight against HIV is, in no small part, due to commitment and support by Uganda’s President Yoweri Museveni.

“At the beginning of the epidemic, it was a big burden,” says Dr. Atwine. “What gave us the big push is the political will. The president took this as a personal campaign, everywhere he would go he would talk about the prevention of HIV and the modes of HIV transmission.

In other parts of the world, PrEP has been associated with a rapid decline in new HIV infections. According to U.S. Centers for Disease Control and Prevention, when taken consistently, PrEP has been shown to reduce the risk of HIV infection in people who are at high risk by up to 92 percent.

At the brothel in Kawempe, and other places where women and girls are at risk of HIV, PrEP is becoming an important addition to the arsenal of tools available to prevent HIV.