Explore contributions, investments and results in our fight against AIDS, tuberculosis and malaria around the world.

No matter how effective vaccines are, they are not enough.

The recent surge of positive COVID-19 vaccine developments has sent waves of relief throughout a pandemic-weary world. However, no matter how effective these vaccines are, they will not be enough to end this global pandemic—and for many of the world’s most vulnerable communities, they won’t arrive fast enough.

The Moderna and Pfizer vaccines were developed in record time. However, these announcements highlight significant challenges: delivering two-dose vaccines with stringent cold-chain requirements to almost eight billion people, many of whom reside in communities with underfunded and strained health systems, is no small feat. Even if we address the logistical challenges, the reality is that it takes time and funding to deliver vaccines, treatments and tests that reach everyone in need. It is a sobering reminder that when lifesaving antiretrovirals were introduced for HIV-positive people, it took seven years before the medicine reached the poorest communities. And during that time, millions of people died, and millions more were infected, and the HIV pandemic continued to grow.

Until we can overcome these obstacles and ensure equitable delivery of vaccines and treatments once available across the globe, the fundamentals of controlling this virus remain as important as ever.

For a long time, many countries will continue to rely on already proven tools to control the pandemic. The formula is simple: test, trace and isolate. This straightforward but effective process is key to safely reopening economies and societies. It is made possible through the rapid and equitable scale-up of diagnostics, which have proven to be the most important tool for limiting the spread of COVID-19. Test, trace and isolate—and ultimately test, trace and treat once more treatments become available—is an efficient, sustainable way to control the virus, especially in contrast to last-resort emergency lockdown measures, which can erode the public support and trust necessary for the success of many other helpful public health measures, including vaccination and mask-wearing.

We have seen this strategy implemented successfully around the world for decades with age-old diseases like tuberculosis. This strategy is also making a difference in the fight against COVID-19.

From high-income nations like Singapore and South Korea to low- and middle-income countries (LMICs) like Senegal and Vietnam, leaders have managed the spread of COVID-19 with the help of robust public health systems and prompt, extensive test, trace and isolate strategies. Many of these systems have been progressively built with investments to fight other infectious diseases, such as HIV, TB and malaria, which governments and multilateral organizations like UNDP and the Global Fund have supported for two decades. Africa Centers for Disease Control and Prevention head John Nkengasong has notably credited a “joint continental effort” focused on widespread testing, contact tracing and public health messaging around mask-wearing for helping many African nations to cope against the COVID-19 pandemic. Investing in these basic epidemic management measures means that many of these countries have imposed shorter lockdowns than elsewhere. 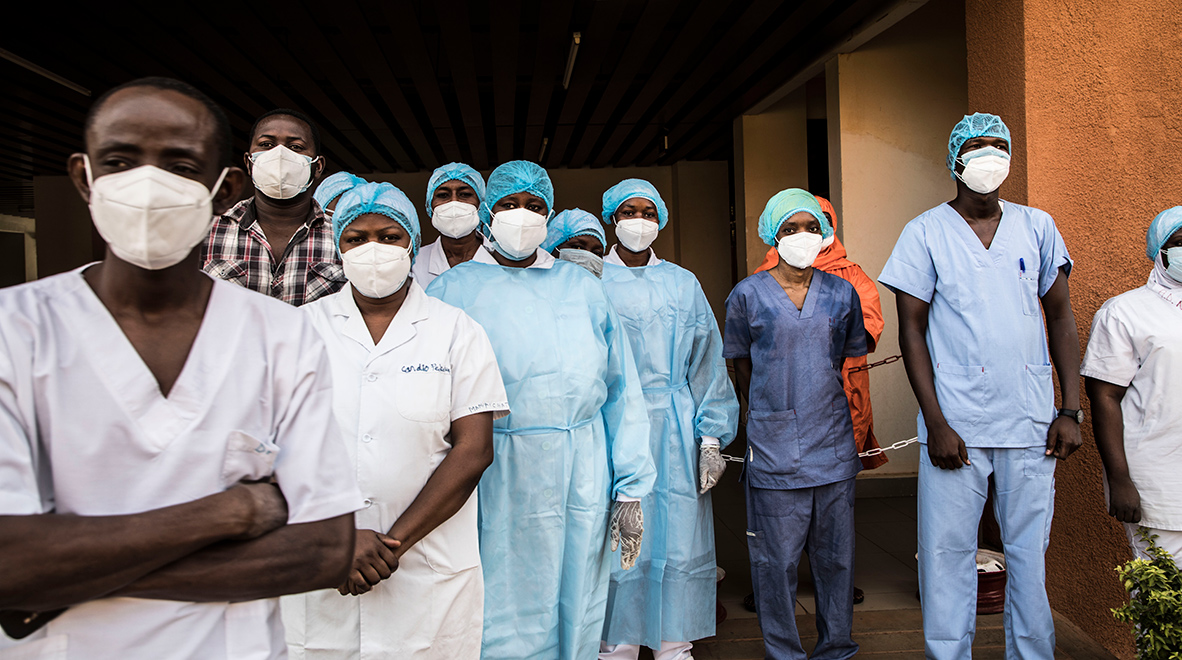 Medical staff at the General Reference Hospital in Niamey Niger, the main hospital in the country that deals with COVID-19 patients.
Credit: © UNICEF/Abdou

But even those that have done well have struggled given the unprecedented scale of the challenge we face. As is often the case, the communities most in need continue to suffer the brunt of the storm both across and within countries.

The reality is that high-income countries are generally able to test a significantly higher percentage of their population as compared to LMICs. The United Kingdom, for instance, has more than 42,000 tests per 100,000 people, covering nearly half the population, while a country like Niger can only conduct 143 tests per 100,000 people. There are, thankfully, promising new signs of support for the development and deployment of rapid testing, such as the Pan-American Health Organization (PAHO) helping South American nations to implement new testing protocols and empower health workers.

But we can and must do more.

The Access to COVID-19 Tools (ACT) Accelerator has found that at the cost of just 77 cents per world citizen, easy-to-use, affordable and reliable tests could be made available to everyone, everywhere, helping save at least nine million lives and prevent over 1.5 billion COVID-19 infections in LMICs. However, only 20 million of the 500 million tests that the ACT Accelerator has called for have been procured and distributed. The ACT-Accelerator has secured 120 million rapid tests through a groundbreaking agreement but has only enough funding to purchase and distribute 16 million of those tests so far.

Funding is urgently needed to scale up diagnostics for those who need them the most. Failure to do so could reinforce global disparities and threaten millions more people, especially those in LMICs, with extreme poverty, food insecurity and job loss.

It may also disrupt essential health services for crucial care like cancer screening, HIV therapy and immunizations. Without the appropriate resources, COVID-19 will remain unchecked, preventing countries from addressing HIV, TB and malaria and getting back on track toward the 2030 Sustainable Development Goals. Unless we act, progress against fundamental challenges such as poverty and gender inequality will be reversed.

Giving governments the resources and capacity needed to build the test, trace and isolate systems around unified public health objectives will mitigate the degree to which we must rely on hard-to-distribute vaccines and lockdowns to control the pandemic, helping prevent further economic hardship. It will also yield dividends far beyond COVID-19. Scaling up these efforts will result in significant long-term gains by strengthening health systems in the countries that need it most, improving emergency preparedness and increasing community resilience, which in turn will help bring all nations closer to realizing their 2030 commitments.