Global Partners Commit to Step Up the Fight Against AIDS, TB and Malaria 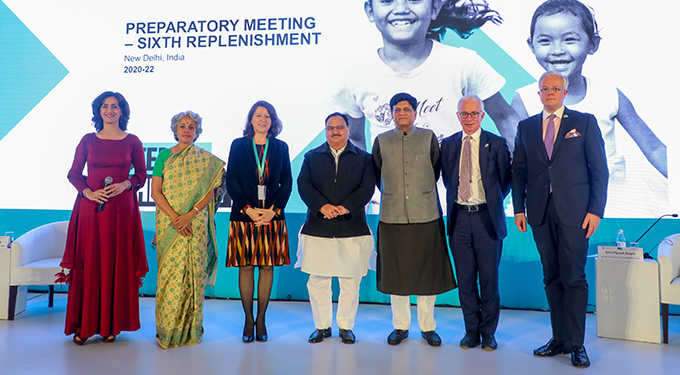 Hosted by the Government of India, the Preparatory Meeting of the Global Fund’s Sixth Replenishment brought together governments, donors, technical partners and civil society groups in a demonstration of global solidarity to pursue Sustainable Development Goal 3, “health and well-being for all.” The Global Fund is seeking to raise at least US$14 billion for the next three years to help save 16 million lives, cut the mortality rate from HIV, TB and malaria in half, and build stronger health systems by 2023.

“The Government of India and the Global Fund partnership has been a unique one, with India receiving and making financial and concurrent technical support from donors and partners since 2002,” said Shri Jagat Prakash Nadda, India’s Minister for Health and Family Welfare. “I am happy to share that the country has set an example globally by increasing its domestic financial allocations for health.”

India, which has the world’s largest TB epidemic, has set the ambitious goal of ending TB by 2025, five years ahead of the targets set in the Sustainable Development Goals.

Indian Minister of Finance and Corporate Affairs Shri Piyush Goyal stressed India was committed to increasing its domestic financial resources against the three diseases. India has pledged to increase India’s health spending to 2.5 percent of GDP by 2025 to pay for ambitious health reforms, including expanding primary care and delivering universal health coverage. To achieve SDG 3 and end HIV, TB and malaria as epidemics, the world needs to step up total funding from all sources, particularly from national governments.

“India is committed to improving the health of its people,” said Goyal. “We are stepping up our national domestic spending to end TB and other infectious disease. By building affordable, accessible and quality health services for all our people, we are not only making a case for better health. We are also making an argument for faster and more inclusive growth.”

France, which this year took over the presidency of the G7, will host the Global Fund’s Sixth Replenishment Conference in Lyon on 10 October 2019. The conference is aimed at raising funds to fight the diseases and build stronger systems for health for the next three years.

“It is time to step up the fight to end the three epidemics by 2030. In October, for the first time in France, we will host the Global Fund’s Replenishment Conference in Lyon. We are calling on all stakeholders to mobilize to make this conference a success,” said French Minister of Solidarity and Health Agnès Buzyn. “More than ever, we all need to come together for global health. France will carry this powerful message throughout 2019, notably through our presidency of the G7 and at the Ministerial Health Meeting which I will host May 16-17 in Paris.”

Peter Sands, Executive Director of the Global Fund, commended India’s leadership in global health and said commitment and resources from national governments is essential to meeting the Sustainable Development Goals.

“Reaching the Sustainable Development Goals requires the kind of global solidarity we have seen in New Delhi,” Sands said. “With global leadership from India and France, and the strong voices of civil society partners, we can rid the world of these epidemics.”

The Global Fund is a signatory to the World Health Organization-led Global Action Plan for Healthy Lives and Well-Being for All, designed to deliver more effective collaboration and coordination on global health.

“WHO has been a proud partner of the Global Fund since its earliest days,” said Dr. Soumya Swaminathan, Deputy Director-General for Programs at the World Health Organization. “We are now further strengthening our partnership through a landmark plan to achieve the health-related SDGs. The Global Action Plan for Healthy Lives and Well-being for All – currently being drafted by 12 organizations working on global health – aims to ensure that together we all deliver maximum results and the best possible value for money.”

The Replenishment Conference will take place at a crucial moment. After years of remarkable progress in the fight against HIV, TB and malaria, new threats such as shortfalls in funding and increasing insecticide and drug resistance have slowed progress and enabled the diseases to gain ground.

Since its creation in 2002, the Global Fund partnership has had extraordinary impact.

In the countries where we invest, more than 27 million lives have been saved and the number of people dying from AIDS, TB and malaria has been slashed by one-third. The Global Fund delivers this impact together with a diverse range of partners including bilateral partners, multilateral and technical agencies, private sector companies, foundations, implementing countries, civil society groups, and people affected by the diseases.

The Global Fund’s Sixth Replenishment Investment Case, presented at the meeting in New Delhi today and available below, describes what can be achieved by a successful Replenishment, the new threats facing global health progress today, and the risks if we don’t step up the fight now.